This page will cover:

• In Ireland, approximately 2,935 people each year develop cancer of the bowel, also known as colon, rectal or colorectal cancer.

• It is the 3rd most common cancer.

• The risk increases with age.

• When bowel cancer is caught at the earliest stage, more than 9 in 10 people will survive for more than five years.

The bowel and bowel cancer 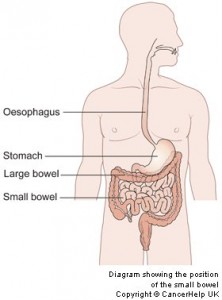 The bowel is part of the digestive system. It is divided into two:

• The small bowel or small intestine

• The large bowel or colon and rectum

Risks and causes of bowel cancer

The causes of most cases of bowel cancer are still unknown but research is going on all the time to establish why some people develop this disease. Researchers have already found several risk factors that may increase your chances of developing bowel cancer. These include:

• Family history – a family history of bowel cancer (at least three close relatives) may increase the risk of getting the disease.

• Polyps (small growths in the bowel) – may increase the risk.

• Blood in, or on, the poo (stool or bowel motions) – the blood may be bright red or dark in colour.

• A change in normal bowel habits such as diarrhoea or constipation for no obvious reason, lasting longer than six weeks.

• Pain in the abdomen or rectum (back passage).

• A feeling of not having emptied your bowel properly after a poo (bowel motion).

Other diseases apart from bowel cancer can cause all of the above symptoms. However, if you experience any of these symptoms make an appointment with your GP to get checked out.

How you can reduce your risk of bowel cancer

Bowel health is important. It may help to reduce your risk of developing bowel cancer if you eat:

• More poultry such as chicken and turkey, and fewer portions of red meat.

• Less cured and processed meat such as bacon, sausages and ham.

• More oily fish such as mackerel, salmon, tuna and sardines.

• Less sugary and fatty processed foods such as cakes biscuits and chocolate.

You can also reduce your risk by:

• Doing at least half an hour of moderate physical activity five times a week. The more active you are, the more you cut the risk of bowel cancer.

• Drinking less alcohol. The less alcohol you drink, the lower the risk of bowel cancer and many other cancers and diseases.

If a member of your family has been diagnosed with bowel cancer you should consult your doctor who may suggest a simple test to detect blood in your bowel motions (stools). There is more information on this test, called a FIT, below.

Remember, early detection of the disease is your best chance of a cure.

Bowel screening aims to find bowel cancer at an early stage in people who have no symptoms. It is done with a simple home test called a FIT (faecal immunochemical test) which looks for tiny, invisible amounts of blood in your  poo (stool). The poo (stool) test does not tell you if you have bowel cancer but it might tell you that you need more tests, such as a colonoscopy.

Bowel screening may also find other changes in the bowel, such as polyps, which are small growths that are not cancer but, if not removed, might turn into cancer. If polyps are found, they can be removed easily.

BowelScreen – The National Bowel Screening Programme offers regular, free bowel screening to men and women aged 60 to 69. Bowel screening involves a free, quick, easy-to-use home test every two years while in the age-range. You simply collect a poo sample on a sampling stick provided in your test kit and send it back to BowelScreen for analysis.

Once you have sent your sample to BowelScreen, you will get a letter with the results in four weeks. Most people will have a normal result. If your results are not normal, this means that blood was found in your poo sample. It does not necessarily mean that you have bowel cancer but it does mean that you may need to have a colonoscopy.

Treatment depends on the stage of the cancer and where it is in the bowel. The main treatments for bowel cancer include surgery, chemotherapy, biological therapy and radiotherapy. It is important that you discuss your treatment with your doctor and let them know if you have any questions or concerns.

If you are undergoing treatment for bowel cancer, this website has information on:

You can also download a copy of the free booklet, ‘Bowel Cancer: From diagnosis to recovery‘ here.